Indian Tennis star Sania Mirza lashed out at Pakistani actress Veena malik when she shared her two cents on the viral video of Pakistani cricketers enjoying a night out.

Mirza was spotted alongside her husband Shoaib Malik and some other Pakistani cricketers at a Sheesha bar in Manchester ahead of Pakistan vs India’s crucial World Cup game in the viral video.

Veena was concerned about Mirza’s little one Izhaan. She took to Twitter and criticized her for bringing a child to a Sheesha cafe. She also questioned if the tennis queen isn’t aware that junk food is bad for athletes as some Pakistani cricketers were spotted at Archies earlier.

Sania, I am actually so worried for the kid. You guys took him to a sheesha place isn’t it Hazardious? Also as far as I know Archie’s is all about junk food which isn’t good for athletes/Boys. You must know well as you are mother and athlete yourself? https://twitter.com/MirzaSania/status/1139950267619692544 …

1,989 people are talking about this

The tennis star debunked the allegations and told the actor to mind her own business. She also blatantly clarified that she isn’t Pakistan cricket team’s dietitian, mother, principal or teacher.

Veena,I hav not taken my kid to a sheesha place. Not that it’s any of your or the rest of the world’s business cause I think I care bout my son a lot more than anyone else does 🙂 secondly I am not Pakistan cricket team’s dietician nor am I their mother or principal or teacher

Sania, I am actually so worried for the kid. You guys took him to a sheesha place isn’t it Hazardious? Also as far as I know Archie’s is all about junk food which isn’t good for athletes/Boys. You must know well as you are mother and athlete yourself? https://twitter.com/MirzaSania/status/1139950267619692544 …

3,223 people are talking about this

The spat didn’t just end here, Veena took a dig back at Mirza and told her to have guts and not delete tweets. The actress alleged that the tennis star not only blocked her but attacked her personally by saying “If I were you I would be more worried about your kids seeing the ‘not so decent’ magazine cover”. The latter said it in a tweet, the screenshot of which was shared by the actress.

Have some guts & don’t delete ur tweets.Fortunately the technology has progressed so much that people can’t deny their acts.Oh the magazine’s cover u mentioned had morphed images.Also I can bringup all the controversies U have ever had bt I would rather not divert the discusion. pic.twitter.com/8qednFvEBz 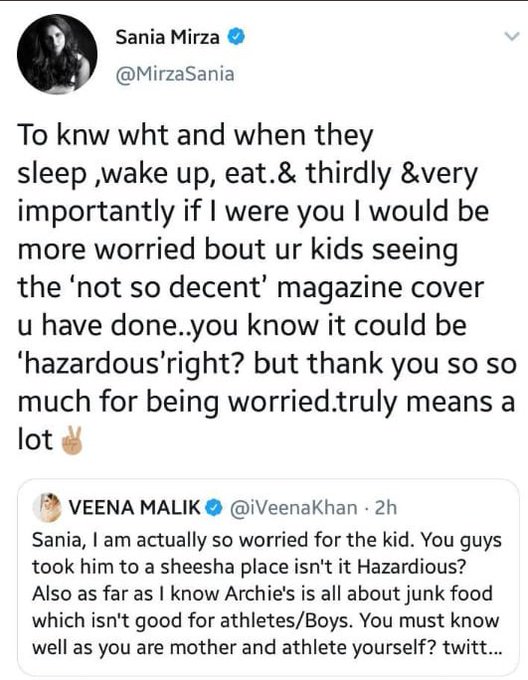 1,150 people are talking about this

After this, Veena got a bit emotional and expressed her disappointment over people thinking just because she was ‘controversial’ , she’s wrong. She told them to leave her past behind and move on.

I’ve told 1000 times the cover of that magazine was morphed image.They think I’m an easy pick or character assassination is easy or they can bringup my past to shut me up & pull me down.Let me tell u that’s nt happening I’ll always bounce back.Our society needs to have acceptance

Please don’t be hypocrites.Just because you think i’m controversial i’m wrong. No, I can be opinionated as any other human being and I can be right too. I am heartbroken and hurt. Leave the past behind and move forward.

488 people are talking about this

All-rounder Malik , on the other hand, clarified that the viral video is from June 13 not June 15—a night before Indo-Pak match, confirming PCB’s claims that the players didn’t violate the curfew.

When will Pak media be accountable for their credibility by our courts?!

Having served my country for +20 years in Intl Cricket, it’s sad that I have to clarify things related to my personal life. The videos are from 13th June and not 15th

Pakistan cricketers did not violate curfew the day before the high-profile World Cup fixture against India, the Pakistan Cricket Board (PCB) said on Monday rubbishing rumours.

6,000 people are talking about this

Pakistan lost to India in a highly-anticipated match of the World Cup on June 16.