Borderlands 3 plays like Borderlands 2 after it took a few years off to eat clean, exercise daily, and read a book. It’s bigger and smarter, but deep down inside it’s still the same juvenile, violent game that I fell in love with. I’m so relieved.With Borderlands 3, what you see is what you get.… 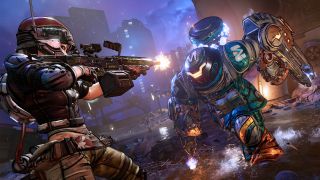 Borderlands 3 plays like Borderlands 2 after it took a few years off to eat clean, exercise daily, and read a book. It’s bigger and smarter, but deep down inside it’s still the same juvenile, violent game that I fell in love with. I’m so relieved.

With Borderlands 3, what you see is what you get. No exploitative microtransactions (cosmetics only) or oblique time-sucking systems masquerading as Content™. It’s just a goofy stat-based FPS you can play with friends. And after playing three hours with two new Vault Hunters and speaking with the creative and art directors, Borderlands 3 is clearly another great excuse to shoot monsters and men while completing quests in search of even stranger guns.Watch our three hours of uncut gameplay to see what I mean.

Unless you finished Borderlands 2 yesterday, the changes and upgrades won’t pop at a glance. There’s no major new features, but its weapons are more surprising and refined than ever, combat is more mobile and chaotic, and—the best part—it’s not another living game in the vein of Destiny 2 or The Division 2. There’s a lot to dig into. Here’s a bird’s eye view of all the important changes from Borderlands 2 to Borderlands 3.

The guns look and feel so much better

Borderlands 2 had a lot of cool guns but their best attributes were typically relegated to stats. All weapon models, regardless of the manufacturer, shared parts from the same universal pool. They looked unique, but few actuallywereunique. Stiff enemies, stiff recoil and weapon animations, and hollow sound effects made the biggest guns feel like aggressive number dispensers at best. As an RPG-infused FPS, Borderlands was ahead of its time, but behind in the ballistics department.

I didn’t think math and meat could actually work together in an FPS with a gachapon gun system, but Borderlands 3 feels like an actual shooter. Guns are loud and heavy this time around, with bespoke firing mechanisms for every weapon manufacturer and weapon type, and much more apparent feedback built into weapon recoil and enemy reactions.

Because there are so many possible variants of guns, they’re not going to have the fidelity and detail of every unique Destiny 2 exotic, but they look, feel, and sound great. Art director Scott Kester told me that’s because Gearbox have essentially made Borderlands 2-sized weapon generation systems for each fictional gun manufacturer in Borderlands 3. “In the past the guns all shared pieces betweenallthe guns, and this time, we built entire suites of gun randomization inside of each manufacturer so that there’s a little bit more cohesiveness to them,” said Kester.

And how is that expressed? Junky Tediores don’t just explode when thrown, they might turn into an explosive holographic bouncy ball or transform into a little brain with eyeballs and spidery legs that harasses enemies with corrosive damage. A basic Hyperion pistol  swallows my arm like Tim Cook designed a Mega Man blaster and fires tracking grenades that let me tag targets and bend bullets around cover.

A Maliwan shotgun throws up a shield when aiming down the sights that might absorb bullets and convert them into health or ammo or send them bouncing back at enemies. And it might require charging up shots before firing, or maybe it spits out everything in my magazine as quickly as possible. That doesn’t even account for each manufacturer’s particular aesthetics or unique crosshairs that express that weapon’s discharge mechanisms, or, more importantly, that many weapons also have alternate firing modes.

Switching between firing rates is a thing, as expected, but most of Borderlands 3’s alt-fire modes are truly alternative. A simple pistol might unleash a rocket barrage with the press of a button. An LMG becomes a grenade launcher. A shotgun swaps between elemental damage types. An SMG transforms into a sniper rifle. In Borderlands 3, having three guns is really like having six guns.

Combat is faster and more fluid

New to Borderlands 3 is the ability to vault, or grab ledges to reach higher ground if my jump height won’t cut it. Coupled with another new ability and recently popularized FPS staple, the crouch slide, and Borderlands 3 becomes one hell of a mover and shaker. Enemies love to run around, too, and because they spawn in greater quantities, there’s no time to stand still in Borderlands 3.

Even if I try to hide, most cover is destructible anyway. But I like the added urgency. It meshes with the gratuitous violence—sometimes enemies will literally go wide-eyed if they see someone with a shotgun crouch-sliding towards their face—and encourages the use of everything in my arsenal. Most arenas make good use of my ability to climb, providing some convenient flanking routes. It means I’m viable at every distance. From a high vantage point, I can get a few sniper shots in before tossing a grenade or popping an ability and leaping down, closing the distance with an SMG or assault rifle, then cleaning up the mess with a shotty, leaping and sliding into and out of cover.

In Borderlands 2, my tactics were: step out of cover, shoot until my shield goes down, get in cover, repeat. In Borderlands 3, my tactics are reckless and maniacal. It’s designed to push me into the middle of the fray, dodging and weaving and juggling a stupidly diverse arsenal to minimize the time spent hiding. The basic act of shooting dudes is finally entertaining enough to stand on its own.

Flossing has yet to be confirmed.

Your adventures in Borderlands 3 are anchored in a ship that orbits one of many explorable planets that aren’t Pandora (but also Pandora). The Sanctuary 3 is your hub and it’s also where most of your old friends hang out. Here’s who and what we know is on-board.

I spent the entirety of my second 90 minutes of playtime wandering Promethea, and stumbled into a handful of fun side missions and collectibles. Borderlands 2 hid the occasional joke or special baddie in its various nooks and crannies, but Borderlands 3 is spilling over with stuff to find and do. Here’s a short list of what I found:

Vehicle customization is a thing, and you can find or steal new parts

Oh yeah, Borderlands 3 is also GTA now. Besides finding hidden vehicles and driving them back to Catch-a-rides to salvage their parts, you can also just hijack enemy vehicles if they’re rolling with a weird lightning turret or chassis you don’t have.

Just kill the driver or hijack their ride and salvage those shiny bits at a Catch-a-ride. From there it’s possible to trick out each chassis with whatever armor, weapons, wheels, skins, and color arrangements you like. In the demo, I found a two-person buggy, a three-person buggy with a mounted turret, and large wheel that works as a solo vehicle.

Strangers took too many of my guns in Borderlands 2. But in Borderlands 3, loot is instanced, meaning everyone in your party gets their own loot for their level. No more hogging, unless you like it. A Classic Mode will allow you to share (and steal) loot. That means power-leveling is still possible too. Hop into a late game area with a level 50 friend and let them kill everything while you hide behind some rocks, leveling up with every breath.

The main villains are, as Randy Pitchford puts it, “… like the douchiest kind of live streamers of the future you can possibly imagine.” They’re inherently punchable faces that make quips about likes and subscribes and call the player their favorite follower.

There’s a fairly long sidequest about fetching coffee for a friend, a joke stretched over several objectives and big fights where the joke is: Coffee is good! I’d say it’s a task for the more aged Facebook meme crowd, but it requires stealing a power cell from a guy named Cell Daddy.

Claptrap still shrieks and shrieks and oscillates between gratuitous pride, stupidity, and shame. He’s building a girlfriend now. A Windows 95-lookin’ EULA appears on-screen when installing the ECHO 3. I killed a king who’d laid claim to my buddy’s burger restaurant. A burger king, you might say.Holds for laughter.

Borderlands 3 is more self-aware and Online than I thought it would be, and while the barrage of in-jokes and references fall flat for me, the physical comedy is better than ever. My favorite bit: I’m asked to install a blood bag on an NPC (who does bad raps that aren’t funny, even ironically) using a button prompt that happens to also be the melee prompt.

Trained by every videogame in history to mindlessly comply, I press the button… and melee the guy. As Zane, my wrist blades cut the dude’s entire arm off. I sat there dumbfounded for a few seconds. More of that stuff, Gearbox.

Note: This story originally stated there was no season pass—but there is. There will be 4 campaign DLC packs coming after launch.