Pre-orders for the all-new Beats Powerbeats Pro totally wireless earphones opened on Friday with deliveries starting later this month. Today we’re taking a quick hands-on look at the new sporty alternative to AirPods before they show up in stores. For a quick recap on Powerbeats Pro, check out these stories: Beats officially unveils ‘totally wireless’…

Pre-orders for the all-new Beats Powerbeats Pro totally wireless earphones opened on Friday with deliveries starting later this month. Today we’re taking a quick hands-on look at the new sporty alternative to AirPods before they show up in stores.

For a quick recap on Powerbeats Pro, check out these stories:

Stay tuned for our full Beats Powerbeats Pro review later this week after we have more time with the brand new hardware. We’ll test sound improvements over AirPods and Powerbeats3 Wireless, battery life results, casual use over several hours, intensive use during workouts including gym sessions and a 5K outdoor running race, and more. 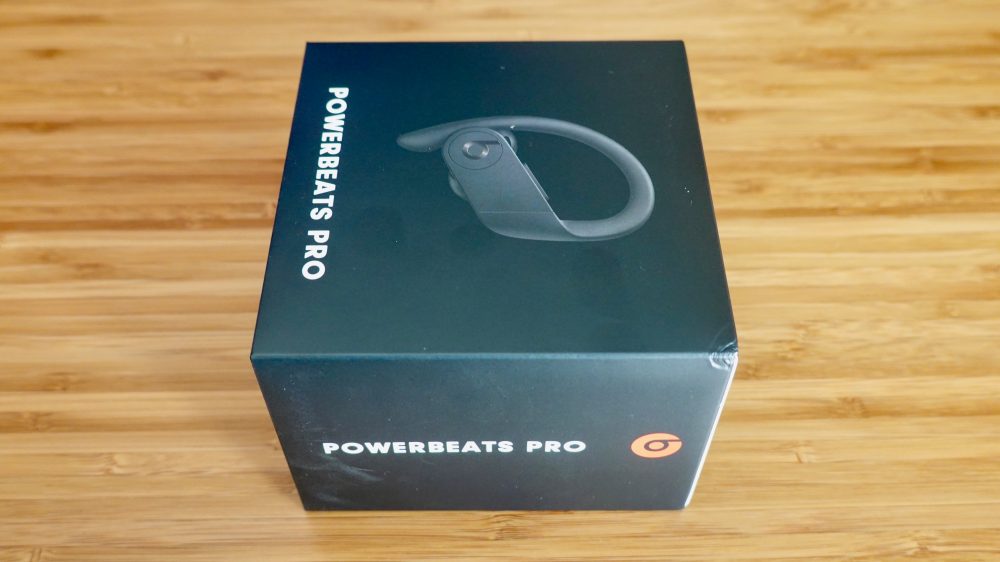 For now we’ll just share an early look and a few first impressions with the highly anticipated Powerbeats Pro totally wireless earphones. We’re testing the black color option which is first to launch; ivory, moss, and navy are shipping later this summer. 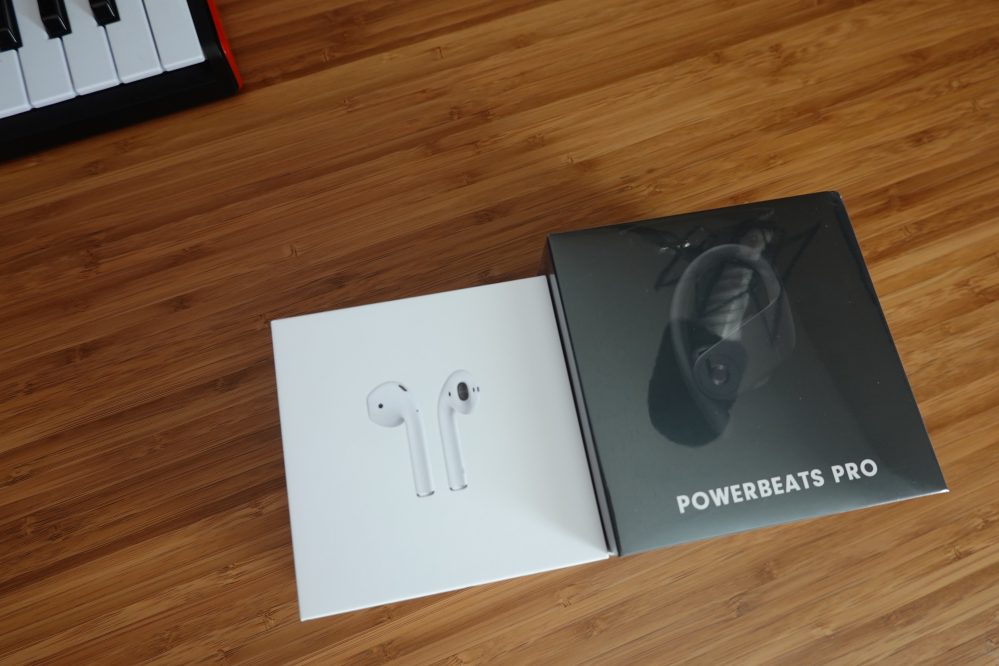 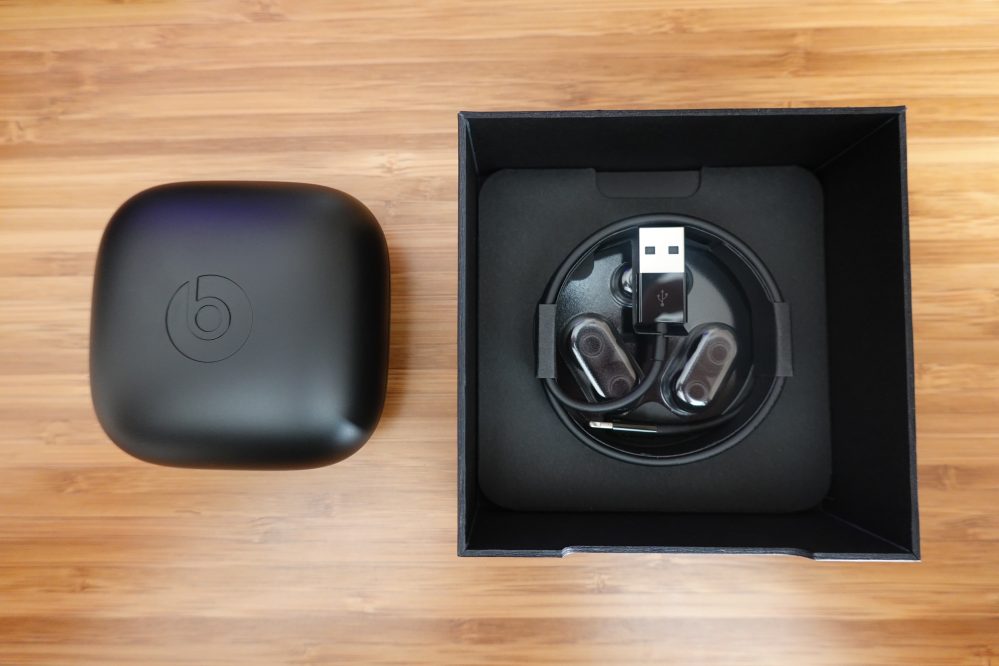 There’s also a specs summary on the packaging: up to 9 hours wireless play; 24 hours with chasing case, sweat and water resistant earphones, adjustable secure-fit earhooks, and on-ear controls for music and calls. One Apple Park Way on the box, and a 2019 Apple Inc. copyright date.

Inside the box are a few accessories including the charge case which store the earphones, four ear tip sizes total (including the default tips which are in between the small and medium additional tips), documentation, the standard red Beats logo sticker, and a black Lightning cable. Interestingly, Beats Pill+ includes a black Beats-branded Lightning cable with a different design and a rubbery feel. Powerbeats Pro include the same exact black Lightning cable that ships with the iMac Pro and the space gray Magic Mouse/Keyboard/Trackpad. 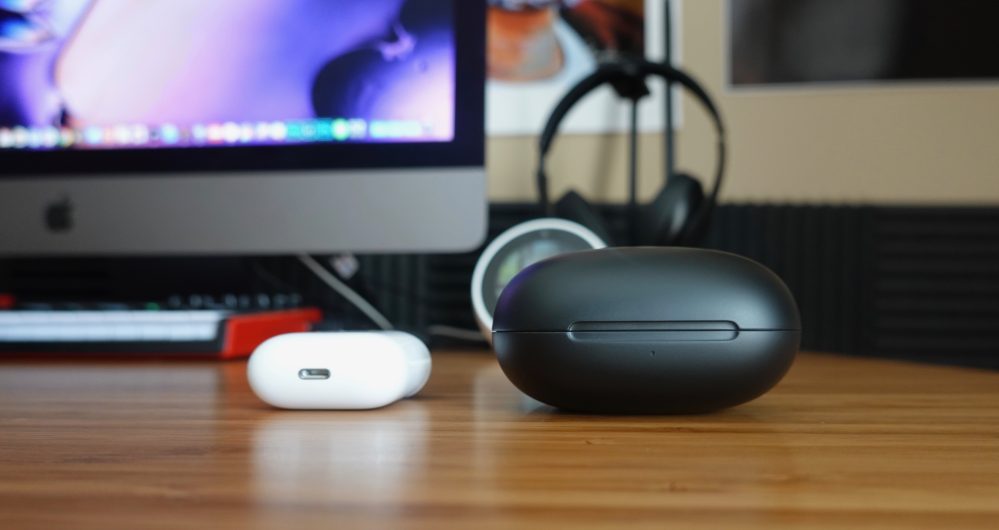 If there’s one fault with Powerbeats Pro, it’s the charging case. It’s much larger than the AirPods charging case and there’s no option for wireless charging. It does use Lightning so it charges with the same cable as the iPhone and AirPods. USB-C would be more universal with Android (and modern MacBooks and iPad Pros), but the USB-A to Lightning cable is included (supply your own power brick). 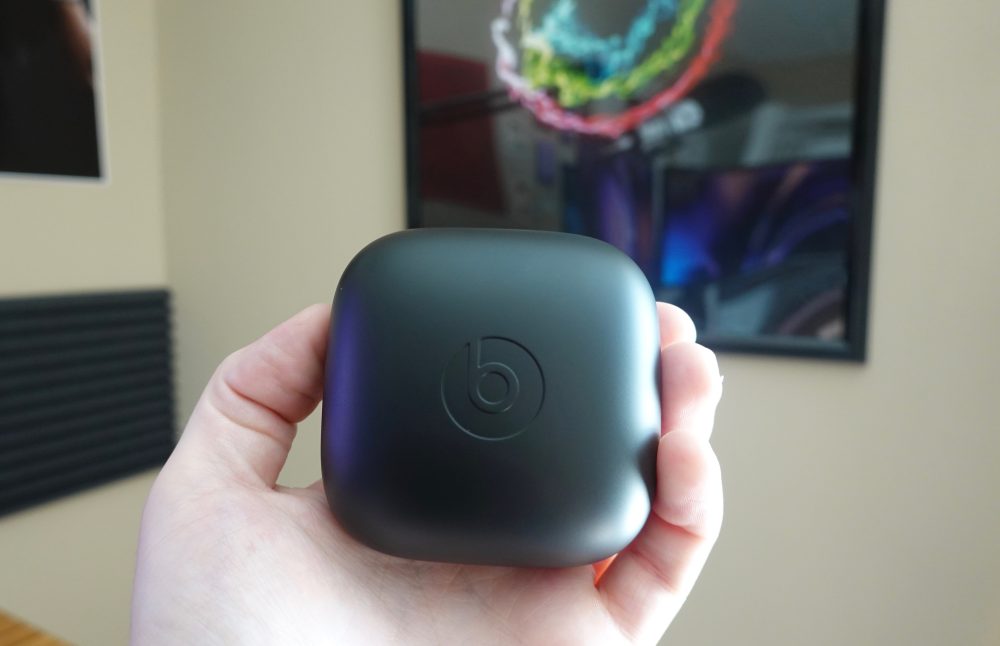 Considering its size, the charging case is more likely to stay on my nightstand or desk or at least be tucked away in my gym bag or backpack versus stowing away in my pocket like AirPods. It’s not meant for jeans pockets and it’s not ideal for gym shorts pockets. 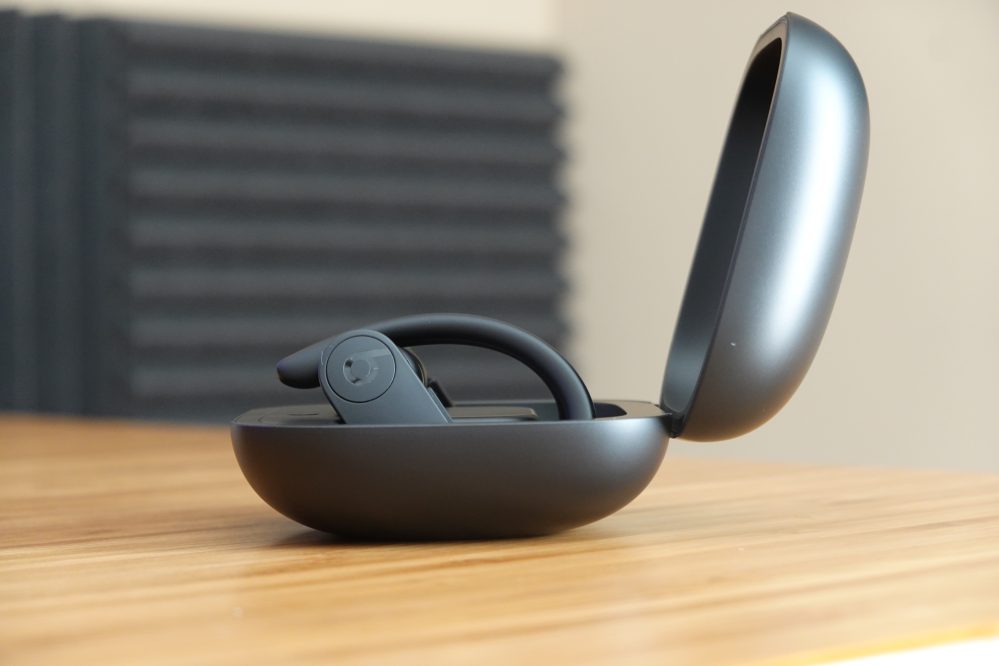 The case charges from the top or rear (depending on the orientation) and sits in place when opened (unlike AirPods) so it’s actually practical to leave it fixed in place for regular charges in between trips.

It’s also a sturdy protective case — Beats headphones include a zipped hardshell case but other Beats earphones bundle a soft pouch — with some intelligence baked in. There’s no button to unlock the case; like the AirPods charging case, it snaps shut and opens with a push using magnetics. It also has an outward-facing charging indicator light that’s the same quality LED as you’d expect from Apple hardware.

Powerbeats Pro earphones snap magnetically in place to charge inside the case with very little alignment required, although learning which earphone goes on which side will take some effort for me. 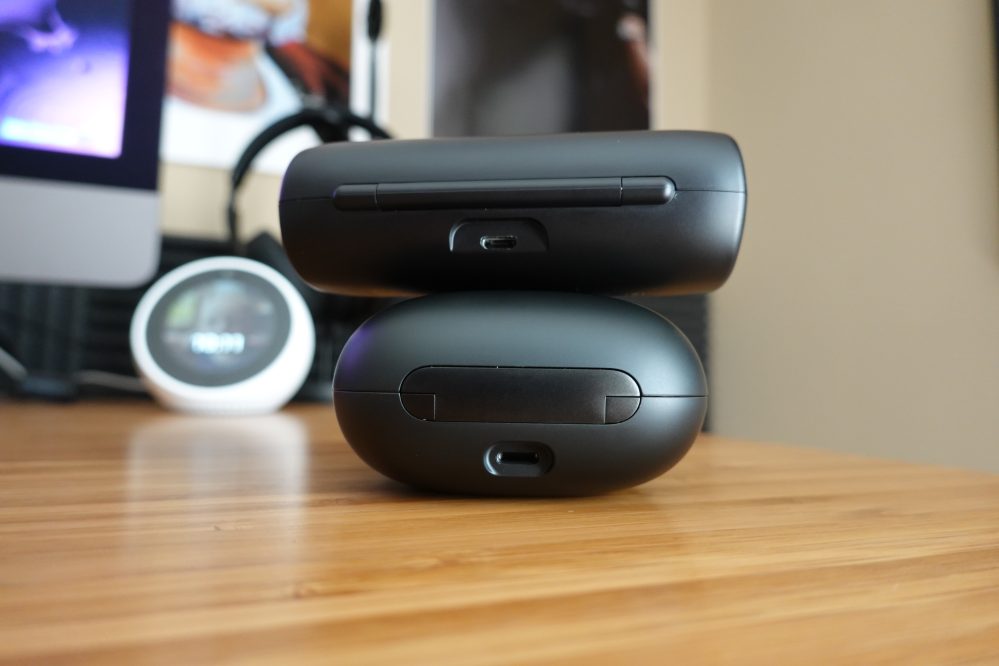 The Powerbeats Pro case design is arguably more favorable compared to the charging case for Bose SoundSport Free, Bluetooth earphones in the same class as Powerbeats Pro in terms of sound and features. Lightning over micro-USB is preferred, and the mini-backpack case has similar dimensions (trading width for height). The Bose charging case has a less sophisticated button and latch for opening and closing, with a mini-sunglass case design and seven charging status LEDs total. 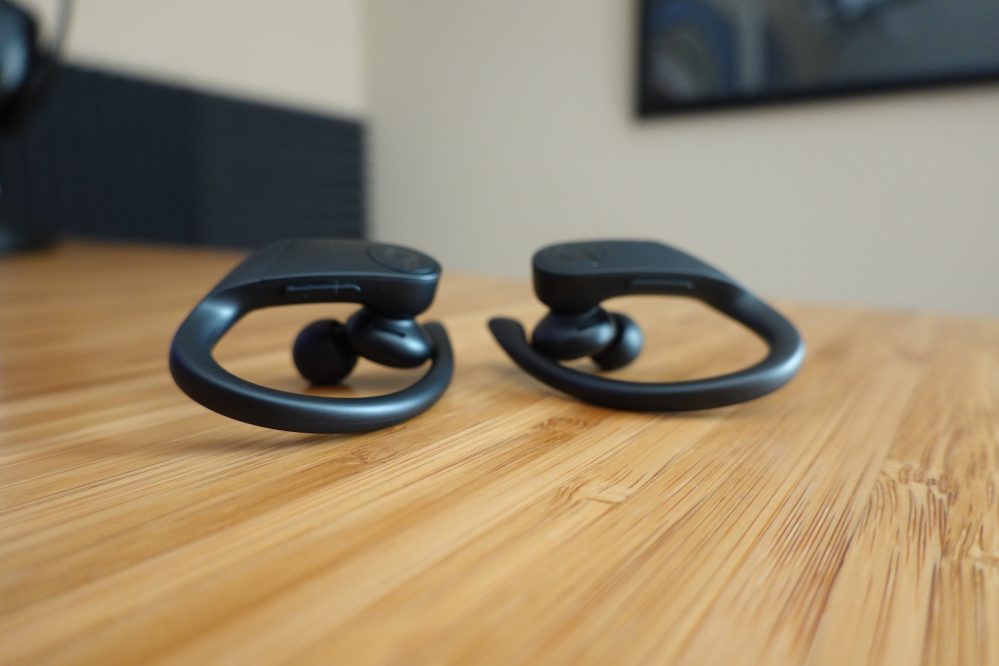 The actual earphones are much thinner and lighter than I expected. Beats says Powerbeats Pro are “23 percent smaller than its predecessor and 17 percent lighter” than Powerbeats3, but I assumed much of that was from removing the cable in between each earphone. Instead, the hardware around the earphones is indeed slimmer (almost as slim as the adjustable earhooks) which makes Powerbeats Pro feel even more modern than Powerbeats3. 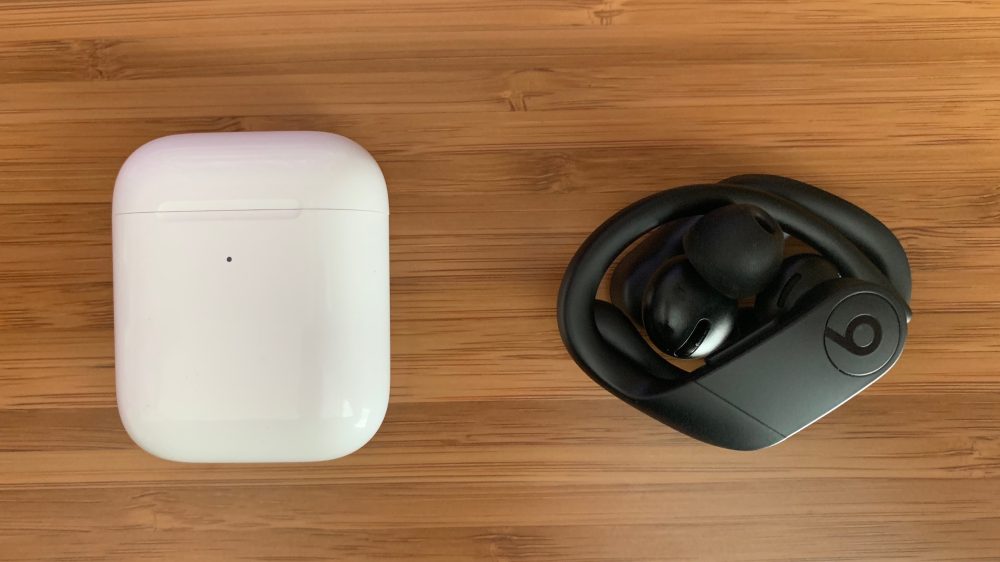 Powerbeats Pro should fit ears that don’t take kindly to AirPods for two reasons: four changeable ear tips plus adjustable earhooks. Ear tips are also great for isolating sound and delivering richer audio to your ears, but earhooks can be problematic in some cases: the hook can interfere with glasses or shades and hats if it’s too bulky. In my limited testing with Powerbeats Pro so far, the ear hook design passes both tests for me (which is a relief since discomfort would be a dealbreaker!). 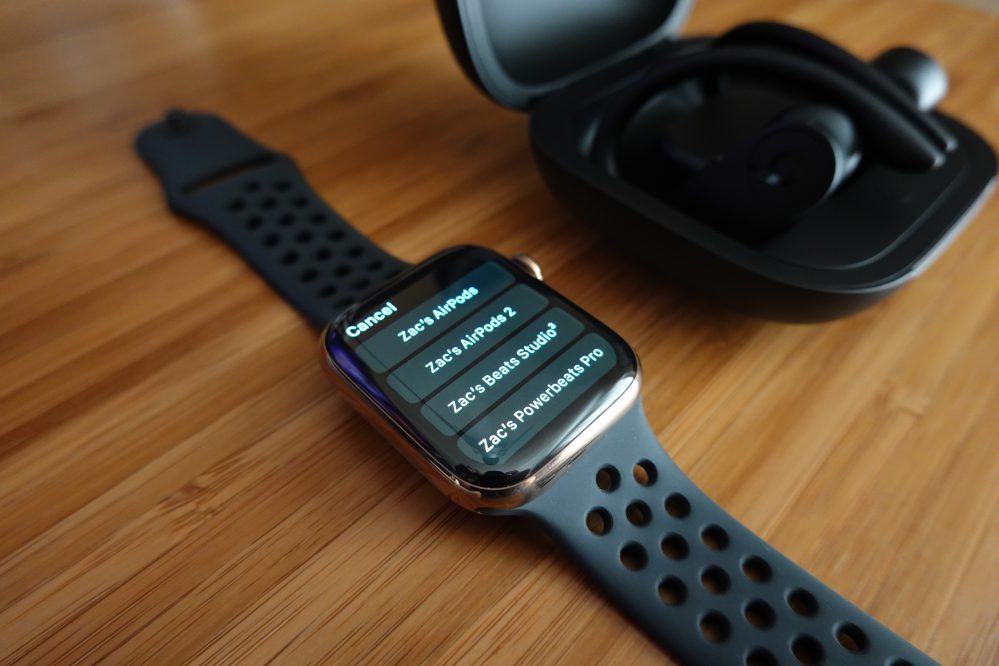 Sonically, there’s no doubt that Powerbeats Pro deliver more range and volume with less ambient noise than AirPods — they’re like AirPods when you press each earphone in with your fingers, except you don’t have to press them in. The sealed design is very effective at keeping outside noise from interfering with your audio playback.

Completely re-engineered from the inside out, the earphones boast an upgraded linear piston driver that leverages an efficient, pressurized airflow to create a powerful acoustic response in a small package. Enhanced sound quality means incredibly low distortion and great dynamic range across the entire frequency curve.

Powerbeats Pro (so far) are also as reliable as AirPods in terms of instant pairing and consistent wireless playback. Initial pairing is as easy as tapping a button on the iPhone or iPad when Powerbeats Pro are inside the charging case and nearby, then other iCloud devices including the Apple Watch and Mac automatically add Powerbeats Pro to the Bluetooth device list. 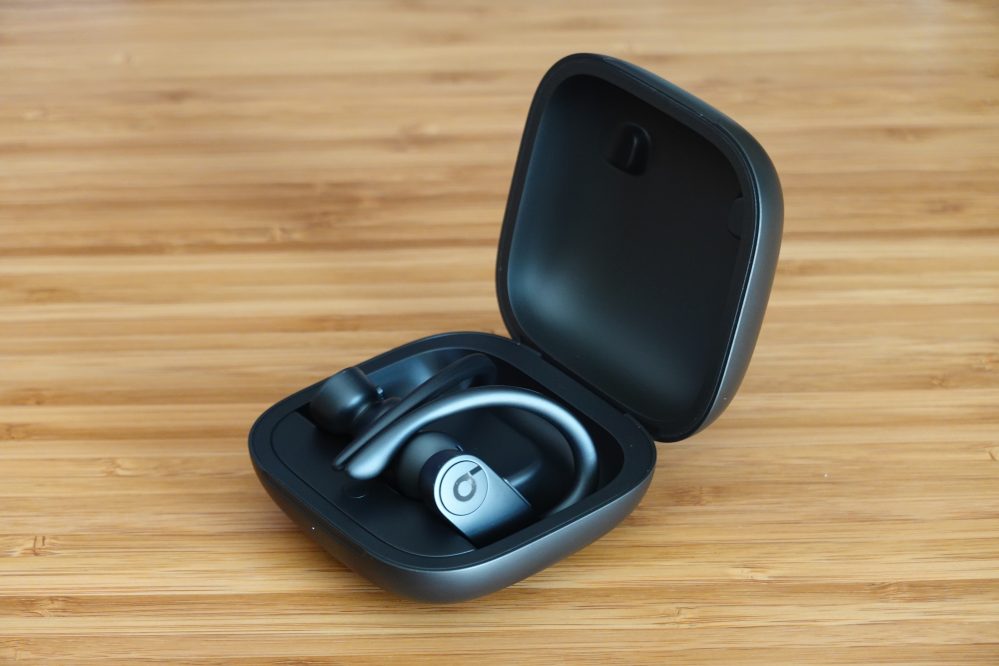 Switching between devices is also just as easy as with AirPods, and “Hey Siri” works just like with new AirPods since Powerbeats Pro use Apple’s new H1 chip. We’ll have much more to say about Powerbeats Pro later this week after more extensive testing with battery life, extended casual use and intensive use during workouts, and more.

Beats Powerbeats Pro retail for $249.95 from Apple.com, Best Buy, and Amazon. Black is available for pre-order now in the US and Canada with more colors and regions to come. 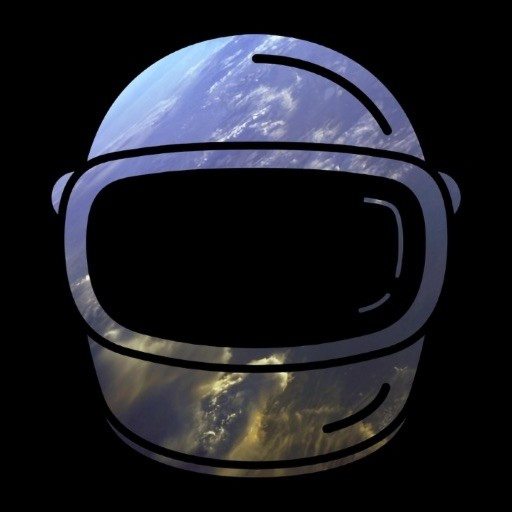 More young adults in the US are dying from heart failure, study finds