Cannes Film Festival is definitely more recognized for its fashion fever than anything else. While a lot of credited films are showcased at the gala event, but we can’t take away from the fact that it’s the red carpet at the French Riviera which everyone sets eyes on.This year the B-Town divas who attended the…

Cannes Film Festival is definitely more recognized for its fashion fever than anything else. While a lot of credited films are showcased at the gala event, but we can’t take away from the fact that it’s the red carpet at the French Riviera which everyone sets eyes on. She experiments when at Cannes! Aishwarya Rai Bachchan has set many examples at the French Riviera- the purple lips, the butterfly trail. However, this year, Aishwarya turned out to be a bit of disappointment. She went bold with gold for her first red carpet appearance, where the gorgeous beauty wore a shiny gold mermaid gown by Jean Louis Sabaji. Her next red carpet appearance was in white, where the diva wore an Ashi studio creation with feather detailing. This one was absolute disappointment as the look fell flat in all senses. Aishwarya’s day looks were boring as well, except the all-denim one where she looked chic. 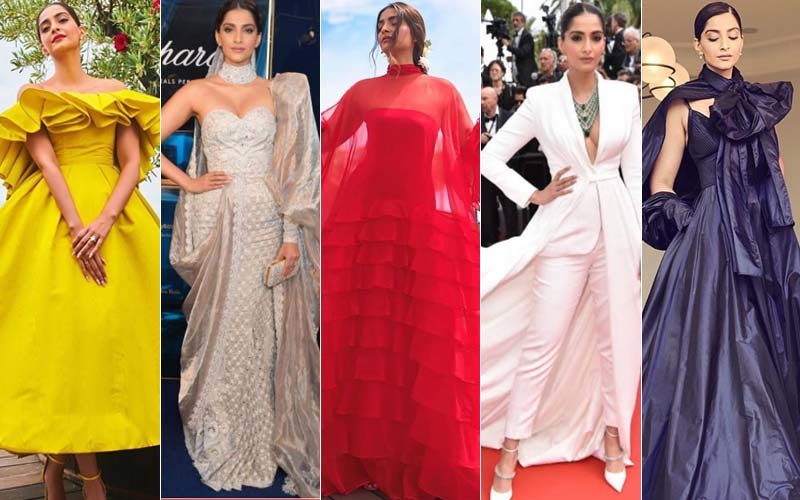 Sonam Kapoor’s red carpet avatar is always awaited, be it at Cannes or any other event. This year the fashionista chose completely different looks at the gala event. For the Chopard dinner she dressed no less than a royal in an Abu Jan-Sandeep Khosla creation, which was a fusion of saree and gown. The next day, at the red carpet, the Neerja actress stunned in an all-white Ralph and Russo tuxedo with trail and beautifully matched Chopard emerald jewellery with it. Her day looks comprised of an elegant navy blue gown by Ellie Saab, a red ruffled dress by Maison Valentino, a bright yellow pleated structured dress by Ashi studio. Overall, Sonam killed it! Deepika is pretty bold with her choices whenever at Cannes. This year, this dimpled beauty took that a notch higher and displayed some extravagant and dramatic red carpet appearances. Her first look at red carpet was in white and black where Dippy wore a big bow gown by Dundas. Hair styled boldly in a sleek high pony and catty eyes- Deepika won hearts with this look. Next day she went quirky with a lime green ruffled dress by and a head band by Giambattista Valli. I was not a fan of this one. Her day looks were ho-hum. Some did stand out like the ruffled black dress with tinge of neon by Off White. The actress paired her gown with sneakers and the look did fare well. Deepika’s stint at Cannes 2019 was just about decent and I’d say she was at the borderline. Mrs Nick Jonas made her Cannes debut this year. And I’d say it was not at all bad. Although her red carpet appearance be discounted, the day looks and the dinner appearances by Priyanka Chopra were killer. For the 1st day at red carpet, Priyanka chose a cliché black and rose gold sequenced Roberto Cavali gown- a complete spoiler. The second outing at the red carpet was tad better as Priyanka walked hand-in-hand with Mr holding an umbrella over her, in a serene white GEORGES HOBEIKA tulle gown. BUT guess what PeeCee did a great job with her off-red carpet looks! Be it the all white Honayda separate with the funky hairdo or the sexy skimpy dress by Philosophy. The red hot number by Tommy Hilfiger was a killer too. So, if I had to rate Priyanka’s Cannes debut, it would surely be an 8 on 10. Hina Khan too made her Cannes debut this year and the actress did shine bright. Leave aside the entire Chandivali studio controversy; Hina did a fairly good job at the French Riviera. Her first appearance at the red carpet was a winner. And then the metallic organza gown by ALIN LE’ KAL was a brave choice too. Her day looks were average and safe but I don’t blame her for it, you want to be cautious and balance out your appearances well. A good show by our very own Komolika!

Opinion: Game of Thrones Finale’s Last 35 Minutes Should Have Been a Full Season