They’re leaders in their markets. And those markets should grow tremendously. Only a few weeks ago, I wrote that this could be the most dangerous time ever to invest in healthcare stocks. I wasn’t exaggerating. There has never been as much serious discussion about implementing a single-payer healthcare system in the U.S. With around half…

Only a few weeks ago, I wrote that this could be the most dangerous time ever to invest in healthcare stocks. I wasn’t exaggerating. There has never been as much serious discussion about implementing a single-payer healthcare system in the U.S. With around half of the 2.8 million Democratic presidential candidates (give or take a few) promoting Medicare for All, many healthcare stocks could be skating on thin ice. 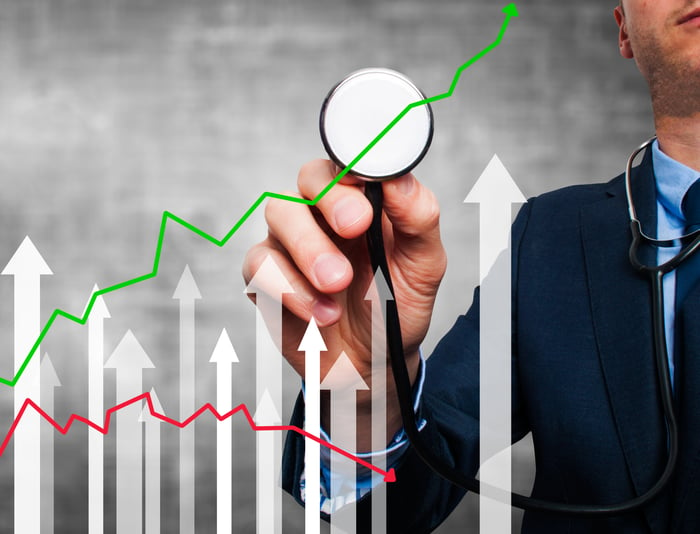 Illumina is the 800-pound gorilla in the genomic sequencing industry. The company’s technology has paved the way for drastically cutting the costs for mapping a human genome. Illumina has continued to innovate, with its relatively new NovaSeq system driving significant sales growth for the company over the last year.

But we’ve only scratched the surface for the potential of genomic sequencing. Illumina CEO Francis deSouza listed several important statistics in his comments at theJ.P. MorganHealthcare Conference earlier this year. He noted that fewer than 0.01% of animal species have had their genomes sequenced. Fewer than 0.02% of human genomes have been sequenced. And fewer than 1% of variants in the human genome have been fully characterized.

Several trends should benefit Illumina for many years to come. Consumer genomics products such as Ancestry and 23andMe kits have been big in the U.S. for genealogy purposes, but have lots of growth prospects in international markets and in identifying genetic health characteristics. Demand for noninvasive prenatal testing (NIPT) continues to rise. The biggest opportunities, though, lie in the research and treatment of diseases, especially rare and undiagnosed diseases.

Illumina makes most of its revenue by supplying consumables used in sequencing. As the use of genomic sequencing becomes more widespread, I expect Illumina’s recurring revenue will snowball, enabling the company to pour even more money into innovation to maintain its competitive position.

Teladoc Health is the clear leader in its market, too. That market is telehealth services. Over 12,000 clients use Teladoc Health, including around 40% of the Fortune 500.

There are plenty of companies that offer telehealth services. But none of them is as large as Teladoc. None of them has the comprehensive services offerings of Teladoc. And none of them claim a global presence as Teladoc does, with its operations in 130 countries.

It’s a pretty safe bet that demand for telehealth services will increase in the future. Visiting a physician virtually through the internet or via a phone call is a lot more convenient for patients than traveling to the physician’s office. Telehealth also offers a solution for addressing the increasing problem of physician shortages in some areas.

More important, though, telehealth helps control healthcare costs. That’s a key reason why the U.S. government is championing telehealth use in Medicare and Medicaid, according to Teladoc Health CEO Jason Gorevic. I think these factors, combined with Teladoc’s commanding market presence and unparalleled scope of services, should make the stock an even bigger winner over the next few years.

My colleague Cory Renauer has called Guardant Health “the best healthcare stock you’ve never heard of.” I think Cory could be right — although more investors now know about the stock, given Guardant’s sizzling performance so far this year.

Guardant Health is a pioneer in developing liquid biopsies that can detect cancer using blood tests. The company currently markets a couple of liquid biopsy products, Guardant360 and GuardantOMNI, that are used for late-stage cancer screening. These products haven’t been officially approved by the Food and Drug Administration yet, but Guardant can sell them as “laboratory-developed tests” that are designed for use within a single lab.

Detecting cancer at early stages using liquid biopsies presents an even bigger opportunity. Guardant Health has achieved progress on this front also, launching its LUNAR DNA test for use by researchers in early-stage cancer detection and cancer recurrence.

What about those sky-high valuations?

You might be leery of the steep valuations for Illumina, Teladoc Health, and Guardant Health. Illumina’s shares trade at nearly 40 times expected earnings. Neither Teladoc Health nor Guardant Health is profitable yet, but the companies claim market caps of more than $4 billion and $6 billion, respectively.

My take, though, is that stocks with premium growth opportunities deserve to command premium prices. I think that all three of these healthcare stocks are poised to grow significantly over the long term. The seemingly sky-high valuations of today could look like bargain prices a few years from now.

How the (plant-based) sausage is about to be made